She sat across the desk from me.

How do I ask someone to write a piece with the primary reason being I want a different perspective on things.

You see, I’m born and raised CRC.  When I was a student here (a long time ago) the vast majority of the Dordt student population was a lot like me.  White, Dutch ancestry, CRC, Netherlands Reformed, URC and a few Presbyterians mixed in to spice things up (said with tongue firmly in cheek).

We were all pretty much cut from the same cloth, and, there wasn’t much variance in the patterns of that blanket.

We are now more diverse, and I think that’s not only not so bad, but actually a good thing.  It’s opened the door for Emily Feilmeier to feel comfortable enough to not only attend but to thrive and grow for four years.  It’s worth noting here Emily was born into the Roman Catholic church and she chose to come here because of a visit day that made an impression.

You see, in my opinion it’s not about keeping people out, no, I think we should be inviting with doors open and to show the world that there is something special here in how we live in the knowledge that we have joy and freedom in the grace earned for us by Christ’s death.

I still believe we are cut from the same cloth, but, that blanket has a few more colors and patterns. 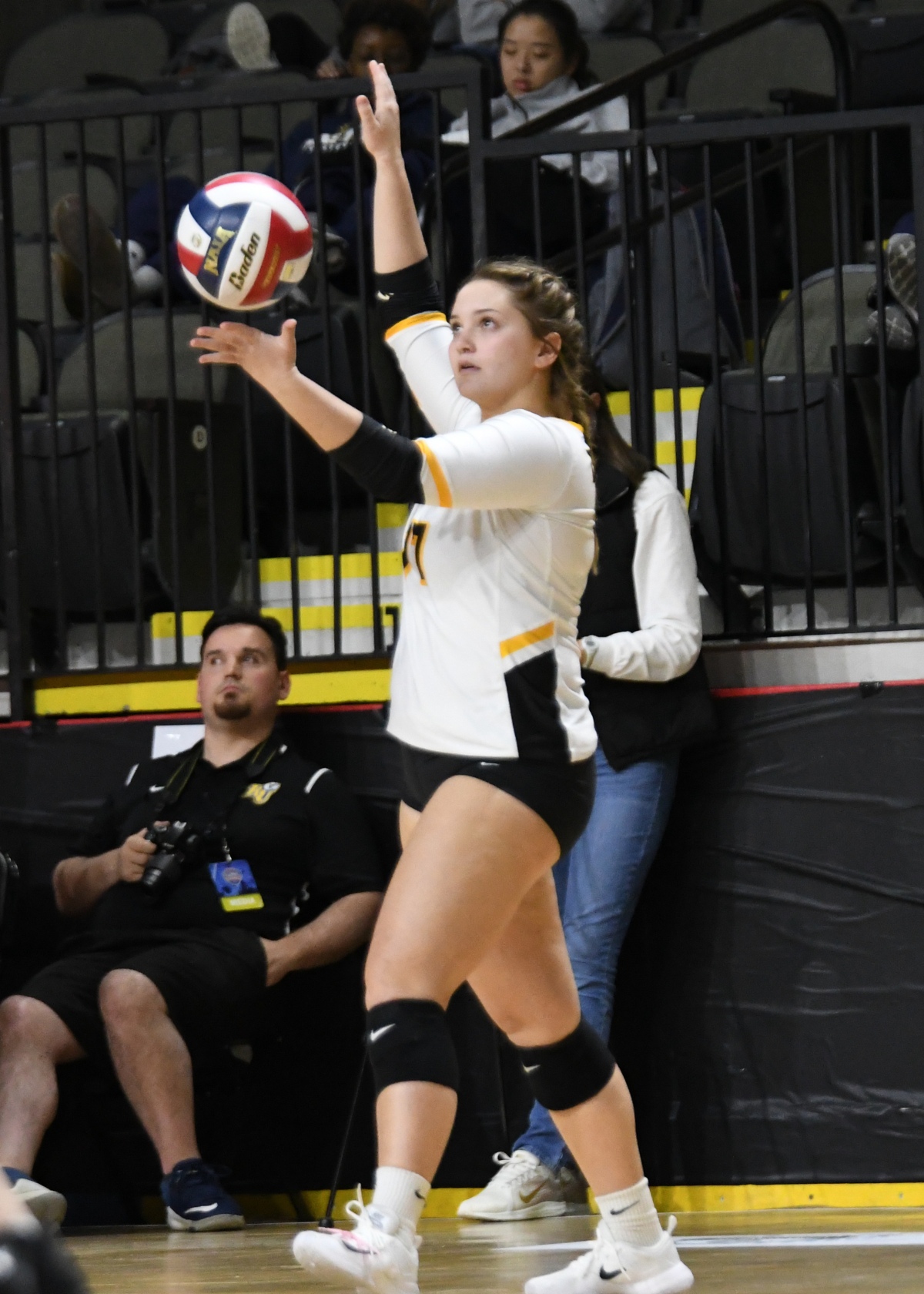 When I started my college search during sophomore year of high school, Dordt really wasn’t on my list of colleges to visit. It wasn’t until a former Mount Marty volleyball coach told me that I should check out the volleyball program at Dordt because they had a 6’6” right side hitter, that I now know to be Haley Moss.

I visited a lot of schools before I came to Dordt. I played around with the idea of going to a Division I school like USD or stay with a smaller school; something I was more comfortable with since I grew up in a small town. On my first visit at Dordt I fell in love with the campus, the atmosphere, the community that stood behind them, the students that I met, the volleyball program, and the way people treated me. I knew that Dordt was the place I wanted to call home for the next four years.

If I could experience what I did that day, every day, then I knew I would love my college experience. I planned a busy career at Dordt, being involved in both volleyball and music.

I was raised into a Catholic family. I went to a Catholic elementary and high school, and my town was dominated by the Catholic faith. I was active in my faith and in my church throughout my years of living at home, but I knew that when I went to college I wanted to explore new faiths and perspectives. My parents stood behind me and supported me while I learned about the Christian Reformed faith and attended new churches in the community.

I was not used to the style of worship that the Christian Reformed churches had to offer. This new worship style was contemporary and refreshing for me, something that I was not used to coming from a Catholic church that was rooted in tradition. Dordt also offered me a new and exciting perspective on Scripture. I did not grow up reading a lot of Scripture, like my friends at Dordt so I was not as comfortable talking about it openly in front of others.

My faith life was greatly impacted by Coach Hanson and the volleyball team. The team is where I met some of my best friends and learned the most about how to be a sister in Christ. Every season Coach Hanson has chosen a chapter out the book of James and we memorize it as a team.

Coach Hanson has not only helped me in my Scripture journey, but also my confidence in openly praying in front of others. This was something that terrified me during my freshman year of college. I would always avoid eye contact and hope that my name would not come off of his lips.

Fast forward to this year and I voluntarily pray in front of my teams and with our opponents. I am grateful for this spiritual growth that Coach Hanson has helped me through in my time as a player.

My volleyball career as Dordt is something that I am so thankful for. It has taught me to never give up, to constantly and consistently work hard for the things that I am passionate about, and to be humble in the face of pride.

My first two years of school I was one of two setters on the junior varsity team. Here I met some of my best friends; friends that I hope to keep forever. The end of my sophomore year, Coach Hanson chose me to suit up for the post season. I was able to be a part of the National Runner-Up Team of 2017.

My junior year I took a full varsity role as a serving specialist where I was able to contribute to a very successful team. This team was undefeated in conference play, Conference Champions, and appeared in the Elite 8 at the National Tournament in Sioux City. I was so honored to be a part of a team that was so passionate about the sport, the Lord, and each other. This past summer I transitioned to a full time defensive specialist, training in a middle and left back position.

With some injuries during the current season I would step into the role of a setter, primary right back with some setting reps, and now being a full-time middle back defensive specialist. I believe that being put into different roles throughout my career had ultimately made me a more experienced and well rounded volleyball player.

As I look forward to the future, it makes me sad to think that this chapter of my life is almost finished. But it also gives me so much joy to look back on my time at Dordt and reminisce on all the amazing things I have done and people I have met.

As I am getting closer to stepping into the new chapter of my life, I am so excited to take the things I learned as a Dordt student and a member of the women’s volleyball team and use them to extend the Kingdom of God.