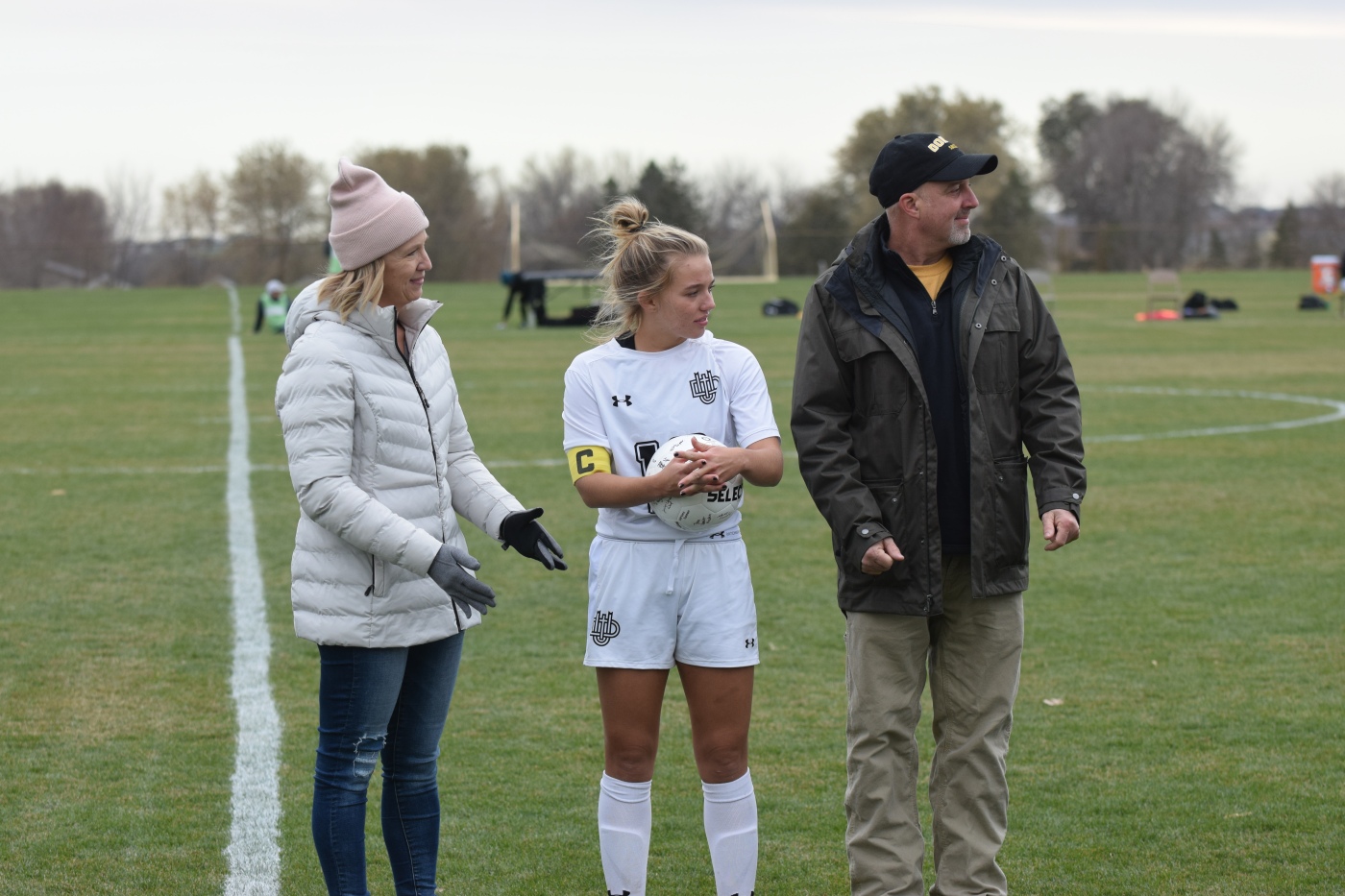 The story of how students end up at Dordt is always interesting.

If I had a dime for every time a high school student said to me, “Yeh, I want something different—I’m not going to Dordt.”

“Sioux Center is in the middle of nowhere, why would I want to attend there?”

I would be a rich man.

Four years ago an aggressive, feisty forward began to make her presence felt for the Dordt women’s soccer team.  Alaina Van Zalen ended this fall with 28 career goals and we hope she gets a chance to add to that total with post-season play this spring.

She’ll wrap up an Elementary Education degree and she’s engaged to be married.

Isn’t that the way it goes so many times?  We have to be shown, prodded, pushed and encouraged and it all works out.

I, for one, am glad she made the uncomfortable at the time, life-shaping trip from Michigan to Iowa.

I remember first hearing about Dordt College from a family friend of mine when I was about 12 years old. Her older brothers had both attended college at Dordt and seemed to love it. They had great friends and were always excited to go back to school. At the time, this was something that I couldn’t understand.

How could they love a school that was in a far away, middle of nowhere town in Iowa? All I knew about it was that there was a whole lot of corn and very few opportunities to come home and visit your friends and family in Michigan. I would have never guessed it would eventually be a place I called home.

Fast forward to my senior year of high school. After looking into and visiting various schools, most of which of which were no more than 40 minutes from my house, I had narrowed it down to two schools. Dordt and Grand Valley State University, and they couldn’t have been more different.

I had visited Dordt two times, first as a junior and then again as a senior. I left each visit excited and able to envision a future there. On each visit, I met with faculty in the education department as well as with the soccer coach. The education professors I met with were amazing, but what really stuck out to me was the soccer coach. At this time, it was Bill Elgersma, who was a “say it how it is” kind of guy. This was something I didn’t really experience at the other schools I visited, he told me about the program and school with complete honesty. It didn’t feel like another rehearsed sales pitch making the school and program sound flawless and above all others.

Rather, I could tell he cared about making sure Dordt was a good fit for me. Elgersma explained that my education should be my priority and soccer is the dessert on top, something you can look forward to after class every day. That statement stopped me in my tracks. It was the exact perspective I had explained to my mom minutes before and something no other coach even hinted at. I left that meeting feeling positive that Dordt was a great fit for me.

But this feeling didn’t last long. The idea of moving to an unfamiliar place, far away from home terrified me and I was drawn to the familiarity and comfort of attending school close to home. So early in my senior year, I made my decision.

I was going to attend Grand Valley University.

But a few weeks after I thought I had made up my mind, a Dordt representative came to my high school to meet with all the students who had previously shown interest in attending. I had no intention of going to the meeting because I was no longer considering Dordt an option. But Elgersma requested that I attend the meeting and I was pulled from class to join.

I don’t remember exactly what was said, but left the meeting making a complete 180. I changed my mind and decided that I was going to be attending Dordt the following year, where I could get a great education and continue to play the sport I love. Little did I know that this last-minute switch would be one of the best decisions I have made.

I am not going to lie and tell you that moving far away from home was an easy adjustment. I definitely had times, especially in the beginning, where I wished I could just go home, back where everything was familiar and people knew who I was. But what kept me going was all the amazing people I met at Dordt and my passion to keep playing soccer.

We bonded quickly as we spent every waking hour together during the first two weeks of preseason. Growing even closer during the many practices and long bus rides throughout the season. Making it clear early on that the friends I made on the team were ones that would last a lifetime. I learned more about myself in the first few weeks of soccer then I ever knew was possible.

I learned how to challenge and push myself, to step out of my comfort zone physically, mentally, and spiritually.

Helping me recognize that being uncomfortable makes for the best experiences.

Because we will never learn to grow and depend on God if we are always comfortable.

Looking back over my four years here, Dordt became so much more than a place I attended for school and soccer, it was somewhere I grew in all areas of my life. In the end, I no longer consider Sioux Center, Iowa a middle of nowhere town, but instead my second home.